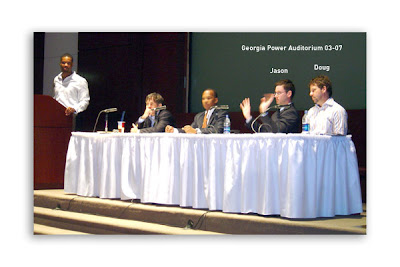 Jason and Doug Davenport of Going Interactive were proud to be on the panel for the Black Public Relations Society of Atlanta’s meeting on “Blogs and Other New Media”. The event took place at the Georgia Power Auditorim on March 20th. Jason and Doug were joined on the panel by Daniel Greenfield, VP Corporate Communications Earthlink, and Tkeban Jahannes, E-Communications Manager – Office of the Mayor of Atlanta.